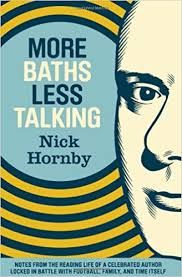 The tagline on this book's cover is "Notes from the Reading Life of a Celebrated Author Locked in Battle with Football, Family, and Time Itself." It's a sexy, slender, perfectly manageable 135 pages, and Hornby's 4th collection of his very entertaining "Stuff I've Been Reading" column for The Believer, in which, each month, he chronicles the books he's read. Each column begins with a ledger which lists that month's BOOKS BOUGHT vs. BOOKS READ. Needless to say, Hornby's book-confessions will speak to anyone with a book problem. They'll especially tickle anyone who has decided, ahem, to write about the ins and outs of their personal reading life. This passage resonated in particular:

The advantages and benefits of writing a monthly column about reading for the Believer are innumberable, if predictable: fame, women (it's amazing what people will do to get early information about the Books Bought list), international influence, and so on. But perhaps the biggest perk of all, one that has only emerged slowly, over the years, is this: you can't read long books. Well, I can't, anyway. I probably read between two and three hundred pages, I'm guessing, during the average working week, and I have the impression - please correct me if I'm wrong - that if you saw only one book in the Books Read list at the top there, it would be very hard to persuade you to plough through what would, in effect, be a two-thousand-word book review. And as a consequence, there are all sorts of intimidating-looking eight-hundred-pagers that I feel completely justified in overlooking. I am ignoring them for your benefit, effectively, although it would be disingenuous to claim that I spend my month resenting you. On the contrary, there have been times when, watching friends or fellow passengers struggling through some au courant literary monster, I have wanted to kiss you. I once gave a whole column over to David Copperfield, I remember, and more recently I raced through David Kynaston's brilliant but Rubenesque Austerity Britain. For the most part, though, there's a "Stuff I've Been Reading"-induced five-hundred-page cutoff.

I won't try to match Nick Hornby's self-deprecating humour regarding the fame, women, and international influence with which any book-diarist has to cope, because while Hornby is an Oscar-nominated, Hollywood-adapted staple, bestselling author, and a regular columist in a hip, globally-read, art-geek magazine - of which I'm a great fan - I'm a virtually anonymous singer-songwriter typing away for reasons much more personal than public.

And although this 100-book mission of mine's mandate is to finally read 100 of the books which, for one reason or another, have been hanging over my head for years, the truth is, it'll be many months before I'm able to make time for any bouts with the books that are out of my weight class - David Foster Wallace's Infinite Jest, for instance, or T.E. Lawrence's The Seven Pillars of Wisdom - James Michener's Texas, or Umberto Eco's Foucault's Pendulum - or even the comparatively lighter, but still-daunting fare of the mighty Charles Dickens, of whom Hornby confesses:

If I were walking home down a dark alley, and I got jumped by a gang of literary hooligans who held me up against a wall and threatened me with a beating unless I told them who my favourite writer was... Well, I wouldn't tell them. I'd take the beating, rather than crudify my long and sophisticated relationship with great books in that way. The older I get, the less sense it makes, that kind of definitive answer, to this or any other question. But let's say the thugs then revealed that they knew where I lived, and made it clear that they were going to work over my children unless I gave them what they wanted. (This scenario probably sounds very unlikely to American readers, but you have to understand the violent passions that literature excites here in the U.K. After all, we more or less invented the stuff.) First, I would do a quick head count: my seven-year-old can look after himself in most situations, and I would certainly fancy his chances against people who express any kind of interest, even a violent one, in the arts. If, however, there were simply too many of them, I would eventually, and reluctantly, cough up the name of Charles Dickens.

Incidentally, Hornby goes on to rave about Claire Tomalin's 2011 biography Charles Dickens: A Life, while for me, Peter Acroyd's Dickens (1990) is another one of those tomes (in this case, 1195 pages) from my own library which looms over me at night, like a reproachful monolith, as I toss in a shallow sleep of fitful inadequacy. Not to mention that I have NEVER READ ANY DICKENS aside from A Christmas Carol - which at the very least (he added quickly, fumbling for self-respect) I practically know by heart. Actually, I may have read A Tale of Two Cities and/or Great Expectations as a teenager, but my memory on that is foggy enough that it's easier to say I didn't. So my two takeaways from enjoying Nick Hornby's delightful snack of a diary: I absolutely need to read some Charles Dickens when I'm home from the next tour and able to carve out the time, AND I now have another handful of books (the remaining "Stuff I'm Reading" collections) to track down when this 100 Book Blog is completed.

A final note: this book was a gift to me from my now-deceased and much-loved housemate, Katie Lameck, who gave it to me for my birthday one year while we were sharing a house at 39 Oxford St. in Toronto's Kensington Market. I'm pretty sure that Katie would be entertained by this 100 Book project of mine, and I think, proud of me for doing it. Katie and I, who first met in our early twenties when we worked together at Lichtman's (a belly-upped Toronto book chain of yesteryear), always bonded over reading, and over books, despite that she always found it hilarious that I was known, in small circles, for a show called Bookworm, since, in my actual life, I almost never found time to read. Katie would have read this Hornby collection in an hour or two, giggling all the while. It took this slow poke two weeks, and I'm as proud of myself as a 6-year-old who just managed to finish his first non-picture book - "I did it, Katie!" I wish I could call her to shout, "I read More Baths Less Talking!" Thank you for this book, Katie. It was the perfect read for an over-busy bookworm, and the whole time I enjoyed it, I could you hear you laughing from down the hall.