My father used to tell me that if a book didn't grab me right away, to give it at least 60 pages. He meant novels. His theory being, a novel needs 60 pages for the narrative to have a fair chance to get its traction. With a short story, you don't have that kind of time. It's more like a song; the first few lines are vital; it's got to grab you right off the hop. Well, it took four sentences of "Poinsett's Bridge," the first of eleven faultless stories in Robert Morgan's The Mountains Won't Remember Us, to have my absolute attention.

Son, it was the most money I'd ever had, one ten-dollar gold piece and twenty-three silver dollars. The gold piece I put in my dinner bucket so it wouldn't get worn away by the heavy silver. The dollars clinked and weighed in my pocket like a pistol. I soon wished they was a pistol.

My copy, pictured here, is travel-warped, its binding reshaped by at least one tour; from being repeatedly stuffed into my carry-on satchel, as well as from being the favourite read-aloud material on several road trips. The stories themselves are well creased by my hands: half of them I've read twice, if not three times. I read them aloud to my girlfriend at the time, to friends visiting our home, and to various van-mates on the road. I found myself revisiting my favourites like poems, like songs, or album tracks. I'll return to this collection for the rest of my life - not to mention that as soon as I'm through these 100 books, I'll be looking up everything else by Robert Morgan. 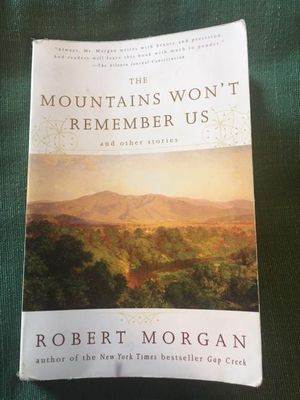 5 of the 11 narrators (each story is told in intimate first-person) are women, and perhaps because the story which ends the book - the title track, as it were, "The Mountains Won't Remember Us" - is 72 pages (the other ten weighing in around 16-20 apiece), and perhaps because the final story is a woman's, and so powerful that it left me weeping and holding the book like it was a person in need of comfort - maybe that's why the presence of the women feel so strong through this collection.

A word about how I discovered this book:

One of the chief pleasures of having a library in my home  - and I believe that this is one of the things which makes a library a library - is that it contains not only many books I've never read, but many I don't even know I have.

Despite that I purchased this very volume -  its underside slashed with black sharpie, remaindered, wayward - many summers ago at a UofT sidewalk sale. I bought it because it made my book sense tingle. It intrigued. It vibed substance. And it was looking for a library where it could be among friends. I happened to have just the home.

And so it was absorbed into my shelves, and just as there must be a tipping number of drops falling from the sky before we call it "rain," and likewise a requisite number of leaves stirred to life before we say, "wind" - just so, there's a magic number of books (which I passed long ago without noticing) at which it's no longer "a number of books," but a library.

And I know it's a library on the day I return from a tour of the South Eastern States - of North Carolina, for our purposes - and I'm sitting at my familiar desk, and a title jumps out at me from my own shelf, at gaze-level - a book which I vaguely remember purchasing, but whose contents are totally unknown to me. That UofT summer sidewalk sale is happening again, but at my own desk.

And I suddenly realize that this book is about North Carolina - that it contains stories, through several generations, about places I've played, passed through, learned about from North Carolina's Jonathan Byrd - places I now know people (at this point I'd been to North Carolina four times). And there I was, just back from the airport, with a piece of Cackalackian history, culture, and poetry at arm's length, looking me in the eye, right when its magic was strongest; just when it could mean the most.

I'll end by saying that The Mountains Won't Remember Us isn't just a good book, it's a book that is spun out of deep, basic goodness. When Jonathan Byrd talks about songs that help us find our heart strength - songs that help us love - he calls them "songs of service." Well, for my money, these are stories of service. I'll leave you with a paragraph from the story "Poinsett's Bridge" which I love so much that I'm gonna learn it so that I always have it with me: 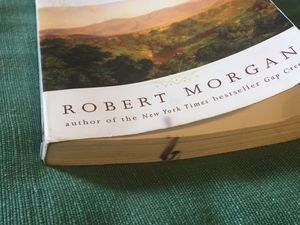 Sometimes you get a vision of what's ahead for you. And even if it's what you most want to do, you see all the work it is. It's like foreseeing an endless journey of climbing over logs and crossing creeks, looking for footholds in mud and swampland. And every little step and detail is real and has to be worked out. But it's what you are going to do, what you have been given to do. It will be your life to get through it.   That's the way I seen this work. Every one of that thousand rocks, some weighing a ton I guessed, had to be dressed, had to be measured and cut out of the mountainside, and then joined to one another. And every rock would take hundreds, maybe thousands, of hammer and chisel licks, each lick leading to another, swing by swing, chip by chip, every rock different and yet cut to fit with the rest. Every rock has its own flavor, so to speak, its own grain and hardness. No two rocks are exactly alike, but they have to be put togther, supporting each other, locked into place. It was like I was behind a mountain of hammer blows, of chips and dust, and the only way out was through them. It was my life's work to get through them. And when I got through them my life would be over. It's like everybody has to earn their own death. We all want to reach the peacefulness and rest of death, but we have to work our way through a million little jobs to get there, and everybody has to do it in their own way.