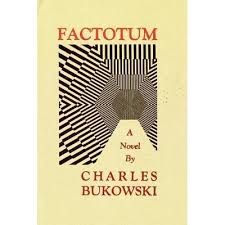 Confession: I bought my ECCO copy of Charles Bukowski’s Factotum many years ago as an intended gift for my brother, which I then never gave him. I kept it to read for myself, which I finally did last summer. I’d give it to him now, but... I kind of want to read it again. (Doug, if you find this blog, it’s yours.)

Also, it’s true: I’m way behind on my 100 book reports, but I never stopped reading (for those who just came in, I’ve set out to read 100 of my own, unread books before purchasing another, with a brief word about each as I go). I’m always reading something, usually a couple somethings, but my life as a full-time, independent performing songwriter doesn’t make for a lot of reading-lamp/book-report time. And yes, it’s true that I spend a lot of my free hours watching movies - but hey, in my defense, it’s easier to play guitar while watching movies - AND it was a movie that put the novel Factotum in my hands.

Years ago, while living in Toronto on Oxford St., I rented Norwegian director Brent Hamer's 2006 film Factotum, based on Bukowski’s book, and which draws from other of his writings as well. The movie is perfect - the tone of it is perfect, it just feels like Bukowski - and it’s hands down my favourite Matt Dillon performance. Anyone who likes to say "movies are never as good as the books" is missing a few tricks, Brent Hamer's Factotum being one. Anyone who tells you you should read the book before seeing the movie, same. Brent Hamer hooked me up with this one (see previous paragraph).

On the surface of it, the novel Factotum isn't about much ("factotum" translating literally from the latin as "do it all,” is an employee whose job is whatever needs doing, "a jack-off of all trades," as Tom Waits put it). Bukowski's narrator and alter-ego, Harry Chinaski, is an employer's nightmare. Throughout the bite-sized chapters of the book, Harry works a series of mind-numbing jobs - but only for long enough to lay some bets at the track, to buy another bottle, or to walk out of his shift to the nearest bar. Chinaski's a committed alcoholic, a regular at the ponies, a drifter through turbulent affairs with booze-broken women, and a writer - and it's his writing that he protects. It’s the one thing which he never allows his soul-sucking rounds as a “factotum” to touch.

This is what I love most about Charles Bukowski and/or Harry and/or Henry and/or Hank Chinaski. He never lets the turkeys get him down. He maintains a dignity of soul. He bucks the entire Presbyterian ethic which I was raised, osmotically, to follow. To those for whom having work is the ultimate goal, it would seem that Harry Chinaski doesn’t care about anything - I mean, if he doesn't care enough about the job that pays his bed and board to do it right, then he must just not care. But Bukowski, and his Bukowski-like narrator, care about something harder-won, and harder to define.

As Bukowski puts it in his poem 'Nobody But You’: 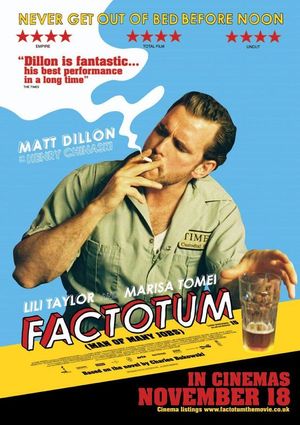 nobody can save you but

and you're worth saving.

it's a war not easily won

but if anything is worth winning then

A decade ago, Vancouver monologuist, director, and playwright TJ Dawe talked extensively and with great passion about Bukowski (and his poem ‘The HIstory of One Tough Motherfucker,’ about the nearly-dead cat he rescued, and loved back to life) in his one-man show Totem Figures, which I saw when it toured in 2008.

Around the same time, I found myself in a Halifax used bookshop, looking for Bukowski, but didn't find any. They were sold out, the proprietor said nothing of Bukowski's stuck around for long. The friend who was with me said, "Says something about his writing, doesn't it?" Last year, I did a show in a Toronto bookshop on College St. (Sellers & Newel, Second Hand Books) where I noticed that Charles Bukowski had a high shelf, all to himself, over the doorway at the back. "That's because people steal Bukowski," said Peter Sellers. "He doesn't survive in general population."

As Bukowski himself says in his poem 'I'm Flattered,' "I was on the minds of a lot of people. it was my own fault for being so easy to read."

He definitely is - but anyone who’s tried, knows: it might be easy to read him, but it’s not so easy to write like Charles Bukowski. Bukowski's earned his hype. He deserves to be sold out, shoplifted, spoken of evangelically by other writers, covered by Tom Waits, and painstakingly made into beautiful films by Norwegian directors; he deserves to be the gift for your brother that you kept for yourself. Which reminds me, I still have a borrowed copy of Sifting Through the Madness for the Word, the Line, the Way. (Eva HD, if you find this blog, it’s still safe.) Maybe I'm just a Bukowski-clutching book miser, or maybe it says something about his writing... I’ll let you decide (and check out the movie Factotum while you’re at it).